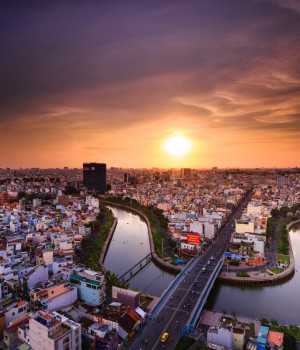 Vietnam’s ruling Communist Party will beginn its 13th congress on Monday to determine the country’s future for the next five years. A new leadership will also be elected. It will most likely focus on driving Vietnam’s economic success.

After all, Vietnam is one of the few countries that managed to grow last year, by 2.9 %, while many economies around the world experienced massive slumps. Only few economies have been as successful in fighting the Covid 19 pandemic as Vietnam. The Southeast Asian country has recorded just over 1,500 Covid 19 infections and 35 deaths so far (as of 22 January 2021).

The successful management of the health crisis is supporting the economy. Consumer confidence is high and Vietnam is also benefiting from a shift in global supply chains as a result of the pandemic and trade tensions.

Recently, a unit of Taiwanese electronics contract manufacturer Foxconn was licensed to build a plant to produce laptops and tablets in northern Vietnam. Foxconn has already invested USD 1.5 billion in Vietnam and created 35,000 jobs in the country. Samsung is now the largest foreign direct investment (FDI) investor in the country. The Korean company has two smartphone factories in northern Vietnam and a TV screen manufacturing plant in Ho Chi Minh City. Samsung is also building its largest research and development centre in Southeast Asia in Hanoi.

According to research group Economist Intelligence Unit (EIU), Vietnam has become a low-cost manufacturing hub, outperforming India and even China on indicators such as policies for FDI and foreign trade and exchange controls. Vietnam’s position among its Asian peers is enviable, the EIU said in a new report. Vietnam stands out for an appealing mix: attractive incentives for international firms to set up high-tech manufacturing facilities in the country, a pool of low-cost labour and the growth of free trade agreements.

Vietnam is also playing an increasingly important role in global trade. Thanks to the EVFTA, Vietnam has become an important trading partner for the European Union. The Regional Comprehensive Economic Partnership (RCEP), the largest free trade area in the world, also includes Vietnam and the country even organised the virtual signing ceremony for the agreement.

Vietnam is also a big beneficiary of the trade war between China and the US. “Vietnam’s exports to the US increased by 22.6 per cent in real terms to nearly 55 billion USD in the first three quarters of 2020. Vietnam’s export industry benefited from the US punitive tariffs on Chinese products”, says Frauke Schmitz-Bauerdick from Germany Trade & Invest in Vietnam. “A continuation of the conflict under US President Joe Biden would be in Hanoi’s interest.”