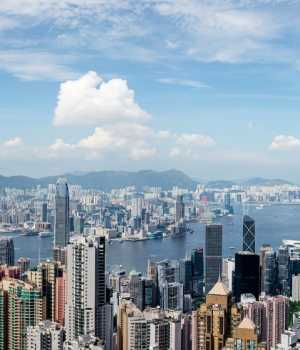 Is Hong Kong’s place as the Asian financial hub collapsing before our eyes? When the National People’s Congress met in Beijing on May 21, after being postponed for several months, a bill was put forward so that, for the first time, mainland China would impose national security law over Hong Kong, in a bid to prohibit “splittism, subversion, terrorism, any behavior that gravely threatens national security and foreign interference”.

It would be the first time that a law from the mainland that carries criminal penalties is introduced into Hong Kong’s semi-autonomous legal code, and it would also be ratified without a legislative or public consultation in Hong Kong.

Not only will this allow mainland Chinese and Hong Kong authorities to more easily crack down on protests and gatherings and greatly ease the way of mainland police to patrol the streets of Hong Kong, many also argue it would fundamentally tear up the so-called “one country, two systems” concept that Hong Kong has followed since 1997.

That year, after the United Kingdom handed back Hong Kong to China after more than 150 years of rule, the framework worked out between London and Beijing gave the city a high degree of autonomy in pretty much every area exact foreign policy, and both agreed this would continue until 2047.

As such, Hong Kong’s mini-constitution, the Basic Law, retained many of the rights of free speech, expression and protest that were practiced under British rule.

The latest escalation in a long line of incursions

But anger has been growing in recent years in Hong Kong. In 2014, the so-called Umbrella Movement – because of use of umbrella’s to protect against the police’s use of tear gas – ballooned as Hong Kongers demanded democratic rights. The city’s autonomous executive is nominated, not voted for by the people – despite universal suffrage being promised under the Basic Law.

Then, demonstrations swept the city for much last year in protest over a planned extradition law, which many argued would have made it easier to transfer suspected criminals to mainland China and, therefore, would subject Hong Kong residents to the mainland’s legal system.

Now, if the new national security law is imposed on the city by Beijing, it would require Hong Kong judges – who have retained their independence from politics, unlike in mainland China – to “effectively prevent, stop and punish acts endangering national security.” It is widely believed that, then, Hong Kong’s judiciary will for the first time be given instructions by the Chinese Communist Party.

For some pundits, Beijing is taking advantage of the world’s distraction by the Covid-19 pandemic to quell dissent in Hong Kong and increase central power. Others, though, point out that this is just the latest escalation in a long line of incursions against Hong Kong’s autonomy.

Indeed, similar attempts to impose mainland security laws on Hong Kong were attempted in 2003 by the city’s then-first chief executive, Tung Chee-hwa, after repeated pressure from Beijing, but angry protests put a stop to the Hong Kong administration passing its own codes. This time around, though, Beijing has bypassed Hong Kong’s executive altogether.

It is not yet 100 percent guaranteed that this new security law will be forced onto Hong Kong, though most analysts believe there’s a very high chance. Since Beijing announced this measure last week, there have been almost daily protests in Hong Kong, though the authorities have responded with even more heavy-handed tactics, would could eventually forces protestors off the streets.

Many analysts don’t expect a massive flight of capital and business from Hong Kong, though it could in the short-term prompt a fall in new foreign investment.

Indeed, businesses worry that a loss of autonomy will imperil Hong Kong’s independent judiciary and rule of law, especially when it comes to contract and business disputes. Most international businesses prefer the fair arbitration process in Hong Kong rather than the politically-tainted one in mainland China.

On Tuesday, Hong Kong’s chief executive, Carrie Lam, tried to rally business confidence, arguing that the new law would “only target a handful of lawbreakers” and that “Hong Kong’s freedoms will be preserved and Hong Kong’s vibrancy and the core values in terms of the rule of law, the independence of the judiciary, the various rights and freedoms enjoyed by people, will continue to be there.”

Singapore, another city-state and Asian financial center, is often spoken of as alternative destination for investors. Others, though, may prefer Taiwan, a democratic nation not far from the Chinese mainland.

However, as media outlet Axios pointed out, for the Chinese Communist Party all this could be part of a long-term plan to make Shanghai and Shenzhen into alternative centers for international finance.

What will the US-reaction be?

Much hangs in the balance. Important will be how Washington responds. US President Donald Trump said on Tuesday that his administration would reveal its response at the end of this week. “We’re doing something now. I think you’ll find it very interesting … I’ll be talking about it over the next couple of days,” he told reporters.

At present, the US provides special status to Hong Kong and has preferential trade agreements with it. But Secretary of State Mike Pompeo has warned these could be terminated if Beijing goes ahead with its new security law. In fact, already in September the US Congress passed a bill that threatened to remove Hong Kong’s special status if Beijing does further erode its autonomy.